Of Pigs and Birds: Angry Birds from Small Screen to Big Screen

In one of the more bizarre talent pairings in recent memory, Emmy award winning writer and producer Jon Vitti is rumored (or reported?) to have joined with the folks at Rovio for a 2015 (or 2016, according to IMDB) Angry Birds movie. Vitti is being tapped to write the screenplay. Rovio, of course is providing the onscreen talent. Of course, you’ve already seen them as a hat, a seat cover, and an air-freshener– why not as star of the silver screen?

There is no shortage of comedy know-how in this alliance. Vitti was awarded an Emmy for his contributions to King of the Hill, and has also worked on The Simpsons, Saturday Night Live, The Office, and Da Ali G Show, not to mention his work on The Simpsons Movie, and Alvin and the Chipmunks films. Seriously, don’t mention it.

For the uninitiated, the game is a collection of very short puzzles where birds are launched via a slingshot at pigs. You know, like in nature. The pigs have cleverly shielded themselves with various and sundry barricades, umbrellas, rocks, boxes, and other objects that are composed of differing materials. Each type of bird the player possesses also has its own abilities and strengths. To pass each puzzle, the player must dispatch each and every pig by hitting the pig with a bird or, even better, collapsing the pigs’ structures down upon their own heads.  The demise of the pigs and even the additional abilities of the angry birds is done in a very comical way. But, the true star of these games is a long dead Knight of the British realm.

With his 1687 publication of Philosophae Naturalis Principia Mathmatica (Mathematical Principles of Natural Philosophy), Sir Issac Newton would become one of the most influential scientists of all time (and a heck of a game designer as well it seems).  Within the Principia he defined most of what we now call classical mechanics.  In addition, the tome contains his Three Laws of Motion. But in regards to Angry Birds, Newton’s First, Second, and Third Laws of Motion compose the entirety of the addictive game play. Rovio has provided a fun way for us to see the Newtonian laws in action. This is a very roundabout way of saying, “It’s the physics, stupid.” Collapsing structures by hitting them with things is surprisingly gratifying. 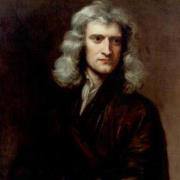 With the impending marriage of Rovio and Jon Vitti we may finally have a movie version of “funny with physics” although not until 2016. Plenty of time for Sir Issac to have a field of alfalfa for the rabbits. We’re ready for our close up!