The World Ends With You: Final Remix has hit the Shelves at Last - mxdwn Games

The World Ends With You: Final Remix has hit the Shelves at Last

It has been 10 years since the Nintendo DS cult classic The World Ends with You came out, and Nintendo took it upon themselves to remake it for the new generation of consoles: the Nintendo Switch. Japan had first gotten the game back in September, and then Nintendo announced in August when it would come to America. That day? Today.

The World Ends with You: Final Remix is the updated version of the cult classic. The story is still the same: you play as Neku, an asocial teenager with amnesia who wakes up in the city with a timer on his hand counting down. Down to what? Erasure, apparently. You have to find a partner, fight against strange creatures known as Noise, and solve a few riddles before the timer goes out. Then, you wait for the next day to have it happen all over again.

The story gets more intense, and bigger and badder bosses are revealed that you have to fight. The riddles get a little harder. But don’t worry, the pins you use as your weapons for you and your partner in the duel-screen play style get stronger too. 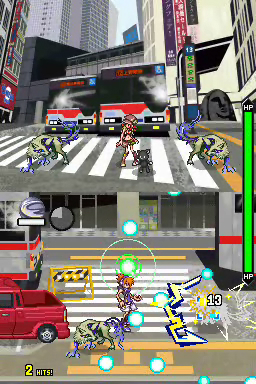 (A comparison of the split screen style on the DS, and the updated single screen of the Switch.)

Because this was a game being reinvented for the Nintendo Switch, there had to be a few changes for the play style of this game. In the original DS game, the player was in control of both partners during fights. The lower touch screen for the main character, and the upper screen using the control pad for the partner. It was a bit of a challenge at first, but it became part of the game’s identity. So how did the Switch handle?

Well, the game uses pins as weapons. You tap the screen with a swipe, a wiggle, screaming (my personal favorite), or rapid touching. These movements activated the pins’ powers and allowed the player to use a vastly different attacks and movements. You relied on doing combos with your partner to do a combo attack that usually cleared out the screen of all enemies.

The Switch, only having the one screen, has managed to make your partner into a pin. Using their set style of fighting, the pin is activated and the power move begins to build up. A new take on a fighting style that became so memorable, will be a whole new way to learn fighting.

Aside from the new fighting style and the new look, the Final Remix shows off new types of enemies to fight against, as well as new pins to use to fight against them. There’s also a new character as one of the ‘Reapers’, who looks mighty similar to the competition winner of a character contest that Square Enix held on DeviantArt before the game had come out. An homage to the contest winner? Possibly. Either way, there’s an old adventure with new ones inside The World Ends With You: Final Remix available today on the Nintendo E-shop for $49.99. Let’s see if you can make it out alive.