Fortnite Mobile has recently surpassed $1 billion in microtransactions over the course of two years. According to Sensor Tower, a large portion of the revenue came from U.S based players, along with seeing a 90 percent rise in plays since the start of Stay at Home orders due to COVID-19. Along with that rise, U.S players spent a collective total of $632.2 million, with Britain at $38 million and Switzerland with $36 million. 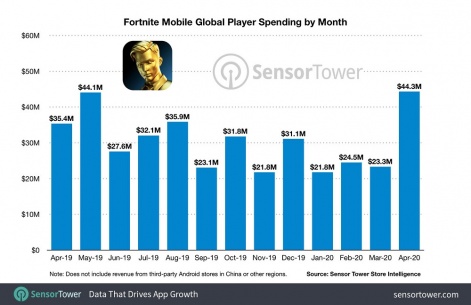 At the same time as this revenue report, Fortnite Mobile has also reached a total of 129 million downloads between the App Store in 2018 and Google Play (which has only been added just recently). Epic Games confirmed in May that the game had reached more than 350 million players on all the available platforms. Again, the US is in the first with the most downloads, with Britain being the second and France the third.

A big part of this surge in downloads is due to the Travis Scott concert that was held not so long ago. “While Fortnite’s revenues on mobile had recently declined since its early since its early heights, the battle royale title remains one of the world’s top performers on mobile, an impressive feat considering only App Store revenue was tracked up until last month,” Sensor Tower mentions in the previously cited blog post. This kind of record-breaking is not a new thing since COVID-19 lockdowns have been implemented, with Steam breaking a record for the most concurrent players more than once in the last couple of months.

Along with this boost in revenue, Fortnite has is also testing a nonviolence mode on console that allows players to walk and explore with their friends. Epic Games has also announced that the game will be available to play on next-gen consoles in the coming future.

Fortnite is coming to next generation consoles 🎮