Recently discussed on Reddit, datamined files and codes revealed that a few celebrity cameos will be available in the final product of Tony Hawk’s Pro Skater 1 and 2. From these files (that were recently obtained from Activision’s newly released demo), users have found pictures of Officer Dick, who’s face model seems to be based on the actor Jack Black. As Officer Dick appeared in the original Tony Hawk’s Pro Skater game (1999) after an update and then again in the 2012 version, this code suggests that Jack Black himself may be an unlockable character as the game’s progress gets completed. 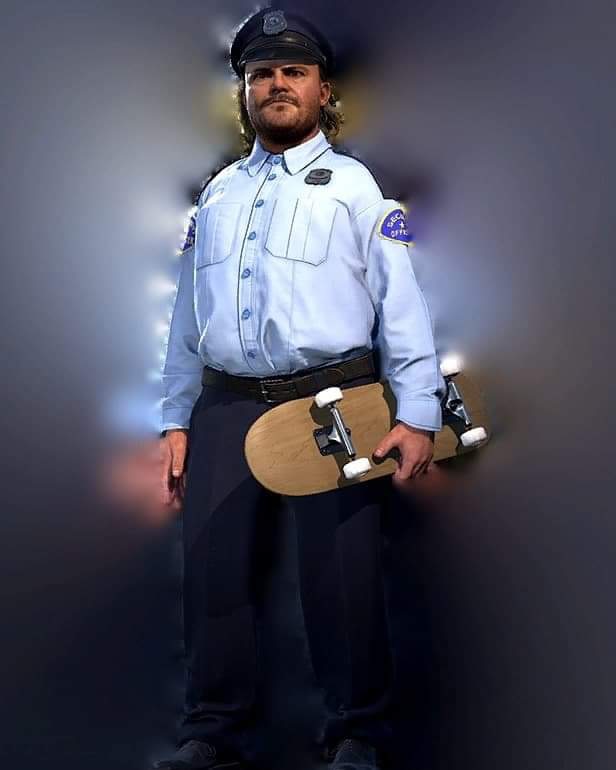 While this certainly confirms all the hints that Jack Black had been providing on his Youtube channel, he also made a surprise appearance in a video on a popular skateboarding channel under the name of The Berrics. At the same time as this appearance, Black also took photos and joined Tony Hawk as he interviewed “The Original THPS Cast”.

The leaked image definitely confirms that he will be apart of the game in some capacity, but it doesn’t confirm just how much involvement he really has. It looks like fans will just have to wait and see when the game is released on September 4th. This found image also follows the announcement that the game will modify the game of the “Mute” grab skate trick, honoring the tricks original creator. According to Hawk, the creator Chris Weddle, who is deaf, was known as the “quiet, mute guy” to his friends and family. After reportedly talking to Weddle, Hawk then announced that he would be changing the problematic name of the “mute grab” to “The Weddle Grab”.

For nearly 40 years, we’ve shamelessly referred to this trick as the “mute” air/grab. Here is the backstory: around 1981, a deaf skater and Colton skatepark local named Chris Weddle was a prominent amateur on the competition circuit. The “Indy” air had just been created & named so somebody proposed that grabbing with the front hand should be known as the “Tracker” air. Others countered that Chris was the first to do, so it should be named after him. They referred to him as the “quiet, mute guy.” So it became known as the mute air, and we all went along with it in our naive youth. In recent years a few people have reached out to Chris (who still skates) about this trick and the name it was given. He has been very gracious in his response but it is obvious that a different name would have honored his legacy, as he is deaf but not lacking speech. I asked him last year as I was diving into trick origins and he said he would have rather named it the “deaf” or “Weddle” grab if given the choice. His exact quote to me was “I am deaf, not mute.” So as we embark on the upcoming @tonyhawkthegame demo release, some of you might notice a trick name change: The Weddle Grab. It’s going to be challenging to break the habit of saying the old name but I think Chris deserves the recognition. Thanks to @darrick_delao for being a great advocate to the deaf community in action sports, and for being the catalyst in this renaming process. I told Chris tecently and his reply was “I’m so stoked!” And then he shot this photo in celebration yesterday. 📷: @yousta_storytellers_club

Following Jack Black’s recent trend of being apart of different video games, he is also supposed to be staring in the upcoming game Psychonauts 2. In this trailer, Black can be seen singing a song for background music at a certain level, but that’s as much information as we get with his involvement as well.