“This is a story of a man named Stanley…” were the first words that came out The Stanley Parable game when you first pressed play. If you listened to directions, you could escape and get home just fine… well… with a few twists. The Stanley Parable had come out back on October 17, 2013, and was received well as a ‘Choose Your Own Adventure’ style game. It had a surreal sense of choices and an overall good sense of humor. If you didn’t spot the humor, check out the trophies list for the game: 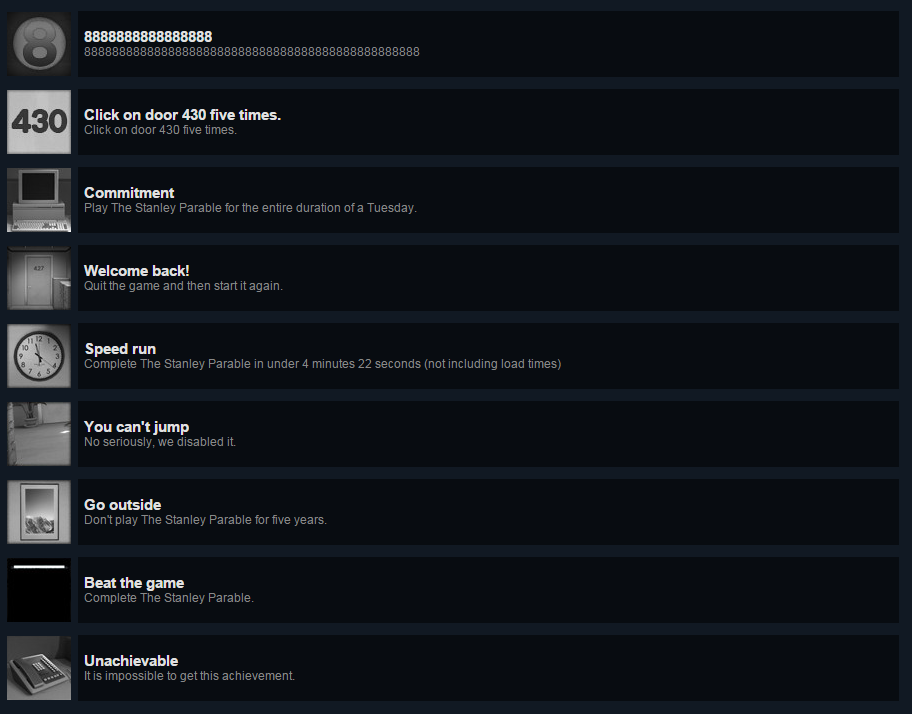 Funky and weird, but still humorous. Some of the trophies you can get easily, such as “Beat the game” and “You can’t jump.” But others like “88888888888888” (was that enough?) and “Unachievable” are… questionable. But it all fits into the surrealism of what the game is. However, there’s one trophy in there that is achievable, but requires some commitment. And more than just the “Commitment” achievement. No, no, this is:

“Go outside.” A trophy that rewards the player by not playing The Stanley Parable for five whole years. The game itself relies on its re-playability to find all the little secrets, get all the different endings, or obtain specific trophies. But this one? This one is made of patience, and relying on you to not play the game.

And those who got the game when it first debuted back in 2013 can finally get the achievement. Davey Wreden, one of the developers for the game, came forth on Twitter today with the announcement:

I have the news you’ve all been waiting for.

Today is the first day that it is possible to legitimately get the Go Outside achievement in The Stanley Parable. pic.twitter.com/3ZxYbJdGhK

While this achievement relies on patience, other than another step towards fully completing the game, there isn’t actually any reward except the trophy. While there are people out there that went into their computers system to change the date and time and year to get the trophy, others decided to take the longer route. I myself still have to wait until February 18, 2019 to hold that achievement as well.

But if you were one of the firsts and decided to wait it out, congratulations. You got a trophy.

How many left until you’re actually free of this office hell hole?